How to pay off your mortgage faster – Here are some tips!

How to pay off your mortgage faster

It is the age old question “How do you pay off your mortgage faster?”

A home loan is probably the biggest debt that most people have, and if there is a way to pay it off faster then we want to hear it!

Here are some helpful hints on how to pay off your mortgage faster!

A great tip when asking how to pay off your home loan sooner is trying to avoid honeymoon rates.

Honeymoon or introductory rates are a common marketing tool among lenders, however, as a borrower, there are a few pitfalls that can make “Honeymoon” rates not worth the ride once the honeymoon is over.

Honeymoon periods are usually at a low rate, however, the problem comes once this period is over and the lender switches you to a higher rate.

This can be often higher than other rates that are available so you will end up paying more in interest in the end.

If you decide after the first year or two to change lenders and try to get a better interest rate you could be facing steep exit fees.

Making higher repayments can pay off your loan sooner

Making higher repayments can be another great tip when it asking how to pay off your mortgage faster.

If you pay a little extra on your mortgage each time you make a repayment you will be getting a little bit further ahead each time.

Pay as much as you can afford to. This will mean you are paying your mortgage off faster, and while it may sting a little at the beginning, in the long run, you will be paying much less interest over the term of your loan. 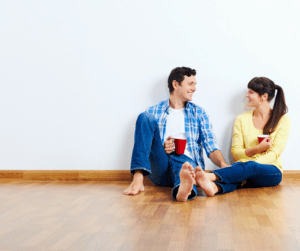 Another good tip on how to pay off your mortgage faster is to make payments more often.

Making weekly payments instead of monthly can make a difference in the long term.

Not only does it give you a weekly budget (meaning you will recognize how much your bills are costing you each week). But it can also get you ahead of your loan because there are more weeks in the year than months (and some months are shorter than others).

Paying weekly means that you will be making an extra month worth of payments in the year!

How to pay off your mortgage faster: Pay off the principal!

You may not be able to do much more than pay off the interest on your loan in the first couple of years, which is a frustration felt by many mortgagees.

Another handy hint when it comes to how to pay off your mortgage or any loans faster is to make extra repayments. This will help you chip away at the actual principle of the loan, which will mean you are paying interest on a smaller amount.

Fixed, variable or split: Which rate should you go for?

If you are worried about the fluctuation of home loan interest rates it may be worth having a look at a split home loan.

Split home loans are partly fixed and partly variable loans (Find out the difference), thus giving you the best of both worlds!

This allows you to enjoy the security of a fixed loan as well as the flexibility of a variable loan.

If interest rates go up it will only affect the portion of the loan that is variable, making the interest rate rise less of a burden than a completely variable rate home loan.

It also allows you the freedom to pay that part of your mortgage off quicker.

Pay off your debts!

Combining or consolidating all of your debt can also be a great tip on how to pay off your mortgage faster.

Consolidating your debt will allow you to only be paying interest on one loan and at a good rate! (home loan rates are usually much better than personal loans).

If you are paying interest on several loans such as:

That is a lot of interest! Rolling them all into one will save you paying through the nose in interest!

Finally the best way to pay off your mortgage faster is to consolidate all of your debt into one and pay as little interest as possible!

This general rule can save your thousands over a 20 year period rather than just plugging away paying the same amount each week a few simple tips can help you pay off your mortgage much sooner!

A Beginner’s Guide To Getting a Car Loan All You Need To Know Before Applying! Before You Get A 3000 Loan You Need To Read These Tips!

Looking for a 5000 Loan? Apply Online with Jacaranda Finance Today!